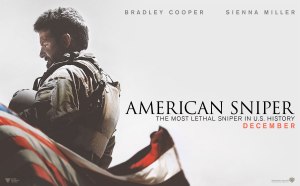 It is the rare movie indeed that produces boffo box office numbers along with extensive and sometimes scorching political commentary. American Sniper is, if you will pardon the pun, right on target in both realms.

Now in its fourth weekend of wide release, Sniper is likely to be dethroned by, of all things, The SpongeBob Movie. Perhaps that’s appropriate; after three weekends in which a war movie dominated theaters and generated wide public discourse, a children’s movie deserves to get some attention. (Next weekend, a movie of a different sort will likely reign, when Fifty Shades of Grey hits the cinema.)

But without question, Clint Eastwood’s latest film is a box-office champion and could garner the venerable director his third Best Picture Oscar when the awards are given out later this month. His last win was for Million Dollar Baby in 2004, although he was nominated in 2006 for Letters from Iwo Jima, a vivid film that told the story of that epic World War II battle from the Japanese side. Some movie buffs had been thinking that Clint, as he nears his 85th birthday this May, might have finally run out of hit films, as his work since Letters had not been well-received at the box office. Guess again.

The life of a warrior.

American Sniper is based on the life of Chris Kyle, a Navy SEAL who served ten years and received multiple commendations for heroism in combat. A native of Texas, Kyle was a bronco rider on the pro rodeo circuit before joining the Navy, eventually rising to the rank of chief petty officer before his honorable discharge in 2009. Married and a father of two, Kyle was killed in February 2013 on a shooting range, where he and a friend, Chad Littlefield, were giving rifle instruction to a 25-year-old Marine Corps veteran, Eddie Ray Routh. It is alleged that Routh shot and killed both Kyle and Littlefield, then stole Kyle’s truck, in which he was captured after a high-speed chase and crash. Routh is to go on trial later this month.

Kyle was credited with 160 confirmed kills during his tours in Iraq, with another 95 unconfirmed. That total is the highest in American military history, exceeding Vietnam-era Army sniper Adelbert Waldron’s 109. The world record is held by a Finn, Simo Hayha, who had 505 confirmed kills in Finland’s 1939-40 border war against the Soviet Union. Hayha, known as “White Death,” achieved his record in only about 100 days of combat, even while being targeted by Soviet aircraft and artillery. 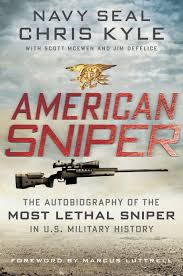 After leaving the Navy, Kyle wrote his autobiography, which has now reached the top of the best-seller lists again, thanks to the movie’s release. First published in early 2012, the book was on The New York Times’ list for 37 weeks and it’s back there again. And it is the book, along with the movie, that has caused controversy.

In the book Kyle tells some stories of his life out of uniform that have brought his reputation into question. The most serious was his written claim that he engaged in a bar fight with an older former SEAL he called “Scruff Face” during a wake for Michael Monsoor, a SEAL and Medal of Honor recipient who was killed in action when he threw himself on a grenade, saving the lives of several fellow SEALs. After his book was published, Kyle went on radio and TV and identified “Scruff Face” as Jesse Ventura, the former governor of Minnesota who had earlier worked as an actor and professional wrestler after serving in Vietnam as a Navy diver, although apparently he was never technically a SEAL. Ventura claimed the fight with Kyle never happened and filed suit. After Kyle’s death, Ventura continued the suit against his estate. Last summer a jury in St. Paul voted 8-2 in favor of the plaintiff, awarding him $1.8 million in damages. The Kyle estate is appealing the verdict.

While some critics say that the Ventura story and other unsubstantiated incidents should preclude Kyle from being considered any kind of hero, others say the movie fails to consider the politics surrounding the Iraq war and thus is incomplete at best and an endorsement of the war at worst. Foremost among these is the liberal documentarian Michael Moore, who tweeted after the movie’s release that “snipers r cowards,” among other things. Although Moore tried later to walk back his remarks, nobody was fooled by that; Moore had been one of the first prominent opponents of the war when it began in 2003 and was often quoted saying admirable things about the Iraqi insurgents and predicting they would win the war.

In the company of warriors.

I attended a private screening of the film in St. Louis Park, Minn., on January 26th. The event was hosted by Sealed Mindset, a civilian self-defense training center in the Twin Cities that was founded and is still operated by Larry Yatch, a former SEAL officer, and his wife Anne. My wife Sue and I have trained there and got to know the Yatches, and it’s a first-class facility with programs in unarmed combat, firearms training, defensive driving and physical fitness, plus anti-bullying programs for kids and leadership training for business executives.

Larry Yatch served on the same SEAL team with Kyle during Kyle’s first tour in 2003, and he credits Kyle with helping him to deal with the challenges surrounding Yatch’s forced medical retirement from the Navy. At the showing, the first of four consecutive nights, I met several current and former SEALs, including Kyle’s sniper instructor, Eric Davis. The stories they told about Kyle were poignant and vivid.

The movie was intense and sometimes disturbing, but ultimately inspiring. Everyone in the theater felt its emotional impact. The performances were exceptional, especially Cooper’s, and Eastwood’s directing touch was never finer. Nominated for a total of six Oscars, I would say it’s likely to win at least four, maybe all of them.

Why has this movie struck such a chord with so many Americans? It’s not a rah-rah, win-at-any-cost war picture as many conservatives might like, and it is certainly not the nuanced, politically-conscious anti-war film so beloved by liberals. Yet I have talked to many people from all political spectrums who have really enjoyed the movie and felt its power.

I think it’s because the movie gives us a hero to root for. Kyle, at least as portrayed on screen by Cooper, is a decent guy who wants to serve his country, and so he volunteers for some of the toughest training on the planet. He falls in love with a woman and has a family with her, but can’t resist the siren call of the battlefield, the desire to get back there and provide overwatch for the Marines on the ground. When he’s home he suffers from PTSD, a disorder that touches so many of our vets, although his symptoms don’t seem to be too severe. Yet it all has an effect on him. Finally, after leaving the Navy, he seems to be getting things together, only to be cut down in the prime of life by a man he was trying to help.

Why do stories of heroes resonate with us so? Since ancient times when men told tales of Achilles and Hercules, we have held up certain brave men, and women, as people to be admired and celebrated for going into harm’s way, often in defense of the rest of us. They do the things we only wish we could do, if were able and willing to make the sacrifices necessary. In fiction they sometimes come from another planet with abilities far beyond those of mortal men. But in real life, they are sometimes just good ol’ boys from Texas. We’ve always needed heroes, and we need them now, perhaps more than ever. 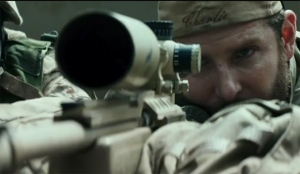