There’s a TV commercial where a father is taking his son home from a youth football game. It’s the end of the season and trophies have been passed out. On the lad’s trophy is the label “Participant.” The dad wonders why it says this; “We won every game,” he thinks. So he tears off the label and writes, “Champion.”

I was thinking of this today as I attended the 22nd annual Northwoods Conquest taekwondo tournament in nearby Cumberland, up here in frozen, snow-bound northwest Wisconsin. I haven’t been to all 22 of the events, but have only missed one or two. The first was held in 1995, and if I recall was the first tournament in which our son, Jim, competed. He was only seven years old and had started taekwondo training the previous summer. Eventually he would rise to the rank of 2nd-degree black belt, and added a 1st-degree black belt in the affiliated Korean art of hapkido.

The first time I actually competed in Cumberland would’ve been 2002, as I had started my own taekwondo journey a little less than a year earlier. I finished second in my sparring competition, and it was a revelation. Taekwondo sparring is full-contact and not for the weak of heart or spirit. Knockouts are not unknown. Fortunately, in the 35+ tournaments in which I competed from 2002-11, I was never knocked out, and in fact was never kicked in the head. (Being 6’5″ tall helps.) But what I learned quickly in that first event is that stepping into the competition ring for the first time is one of those it’s-time-to-step-up moments.

After competing for nine years on the tournament circuit, attending events in four states, I hung up the gloves a few years ago. Although I have been to events which featured competitors who were in their sixties, I decided to go out on top. I won the black belt weapons competition at the North Shore Invitational in Duluth in January 2010, then came out of “retirement” to win in both forms and weapons at the 2011 Conquest in Cumberland. And that was it for me. Although I loved the competition and met a lot of great people, I also came to realize that the intensive training that is required for these events, especially when one competes at the black belt level, was crowding out my writing time. So now I just go to an occasional tournament and help out with judging the events. And it’s still a lot of fun.

We had over 50 competitors in the color-belt ranks (below black belt), and another dozen or so black belts who competed in that division. Many other black belts, yours truly included, were there just to help out with judging. The tournament was once again attended by many high-ranking master instructors, and for the umpteenth year the award for longest-trip-to-the-tournament goes to Grandmaster Jim Grimestad of Red River Taekwondo in Fargo, N.D., who brought along several of his students, including his two daughters. Grandmaster Jim runs one of the finest dojangs in these parts, and you can find out more about it here: www.rrtkd.com

A fine time was had by all, and here are some of the pics I took of the action.

The first tournament I ever attended was my son Jim’s first, way back in ’95, and I was impressed, as all first-time attendees are, by the spirit and discipline shown by these competitors. I thought then that martial arts was one of the best things parents could give their children, and 21 years later that view hasn’t changed.

Our society these days has swung in a direction that goes against a lot of what the martial arts teach. Although competition is not stressed in most of the arts, events like our tournament serve as means by which students can demonstrate their skills and learn to deal with the associated pressure that competition naturally brings. Unlike the youth football league from the TV ad, at these events winners are recognized for their accomplishments. If a student can discipline himself to train for a tournament, he will not always win the competition—I certainly didn’t—but you will learn what it takes to win, and when it comes to self-defense, winning is definitely better than losing.

There are a lot of fine martial arts-oriented blogs out there, but here’s one that any woman considering the study of the arts should check out: The Martial Arts Woman. I guarantee you’ll find a lot in common with Andrea.

Studying the martial arts does not guarantee that a child, or an adult, will be transformed into a new, better person. But it definitely helps, especially for kids who have things like ADHD or autism. Don’t take my word for it; check out this article on parenting.com:  Karate Kids: The benefits of martial arts

As an adult, I have found that martial arts training has helped me grow as a person in ways I never anticipated. I have found within myself the self-discipline that I always seemed to lack as a teenager and young adult, at least as I remember those days. The training helps me deal with stress, keeps me in pretty decent shape for a guy my age, and has provided my wife and me with a way to enjoy one more thing as a couple; Sue began her training in 2010 and achieved her first-degree black belt in karate at the same time I did. Studying the martial arts have led me to meet boatloads of fine people and I’ve been fortunate to have trained with people from all over the world. Plus, I know that if I ever get in a jam, where I have to protect myself or others from harm, I can handle myself.

You’ll notice I mentioned the self-defense aspect last. Usually that is the first reason somebody takes up the study of a martial art, especially for adults. But if you stick with it, and this is not easy by any means, you soon discover that fighting is only one of many things the martial arts teaches you, and it’s not the most important thing.

You might be a little skeptical about that. Okay, so was I. That changed when I stepped onto the mat for the first time. It will for you, too. Find your nearest training center and take a class. They’ll probably offer you one or two for free. You won’t regret it. 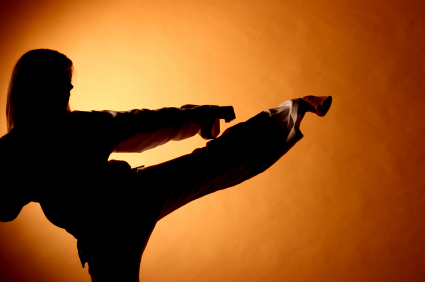