Independence Day in our northwest Wisconsin area typically means attending a parade, joining a few friends for a cookout, or just relaxing. This past Fourth of July we decided to do something truly spectacular, and along with thousands of our fellow Wisconsinites, and doubtless more than a few Minnesotans, we converged on the Chippewa Valley Airport outside Eau Claire for an airshow featuring the U.S. Navy Blue Angels. 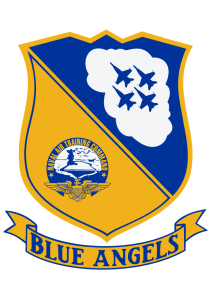 Created in 1946, the Blue Angels is the Navy’s aerobatics squadron, composed of Navy and Marine Corps pilots, and performs dozens of shows every year around the country before hundreds of thousands of spectators. On this Independence Day, we were among a crowd of about ten thousand. It was a hot day and umbrellas were much in evidence, both among the spectators and for sale at concession stands. Fortunately we’d brought our own. I’d first seen the Blue Angels during their previous stop in Eau Claire about five years ago, but this would be Sue’s first glimpse of the team. We arrived around ten o’clock and after setting up our chairs in a prime viewing area, we toured the grounds and enjoyed the many displays. The Boy Scouts were out in force, helping visitors get oriented and demonstrating their own skills.   There was a long line to tour a C-130 Hercules cargo plane, and we joined in. The line moved along at a nice pace and soon we were inside.

The Hercules is one of the oldest-serving aircraft in the U.S. military arsenal, dating back to the 1950s when Lockheed produced an aircraft that could haul a lot of gear and/or men, travel a long ways and utilize short, often rough runways. In the Korean War, we quickly discovered that World War II-era transport aircraft would no longer do the job, and thus came the C-130. The one on display in Eau Claire was owned by the 934th Airlift Wing, an Air Force Reserve unit based in Minneapolis-St. Paul. The aircraft is nearly 98 feet long with a wingspan of 132 feet 7 inches. Powered by four turboprop engines with over 4,500 horsepower, this beast can haul a payload of 42,000 pounds with a range of 1,200 miles. When the Hercules is used as a launch platform for an airborne mission it can hold up to 64 paratroopers. It’s operated by a five-person crew and we were able to meet the crewmen, who told us they had recently returned from a deployment to the Middle East, and although the officer didn’t specify the exact location, I suspect it was somewhere in Iraq. 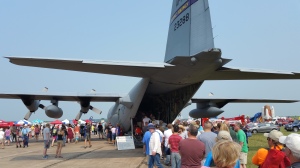 There were some vintage aircraft on display, too, including this B-25J Mitchell bomber. The Mitchell was a workhorse for the U.S. Army Air Forces in World War II, serving in Europe, North Africa and the Pacific, where it proved particularly effective not just as a medium bomber but as a ground-attack aircraft. Almost 10,000 B-25s were built, and many remained in service in other nations’ air forces as late as the 1970s. 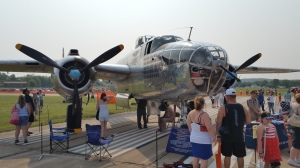 Like most bombers of that era, the B-25 is quite small by comparison with today’s generation. It’s hard to imagine flying one of these aircraft over hostile territory, fending off enemy fighters and dodging anti-aircraft shells. Yet fly they did, by the thousands, and a lot of them went down, carrying many Americans with them. Recently I read a fine book about the crew of a similar bomber, the B-24 Liberator. The Wild Blue: The Men and Boys Who Flew the B-24s over Germany 1944-45, by the renowned historian Stephen Ambrose, focuses on the crew led by future U.S. Senator George McGovern, and their harrowing missions flying their Liberator out of Italy. What is most striking about reading these stories is realizing that the men who flew these aircraft, under such terrifying circumstances, were barely out of boyhood. The average American bomber pilots in World War II were in their early 20s, a much different reality than the grizzled veterans we often see in the movies. McGovern had just turned 22 when he flew his first combat mission in command of a B-24. Paul Tibbets was an old man of 27 when he was given command of a B-17 squadron in Europe in 1942. Three years later he flew the B-29 that dropped the atomic bomb on Hiroshima. Unlike many of their comrades, McGovern and Tibbets survived the war. Over 40,000 U.S. airmen never came home. 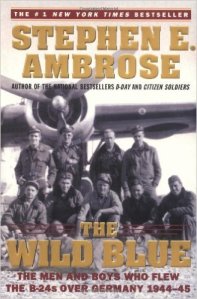 Today’s military pilots are generally older, but not by much. In the Blue Angels team, the flight leader, Navy Captain Tom Frosch from Michigan, is in his mid-forties, but the five other pilots in the squadron all list high school graduation years from 1998-2002, according to their official bios. Every one of them has undergone far more extensive training than the typical U.S. fighter or bomber pilot had in World War II. The Blue Angels fly the F/A-18 Hornet, manufactured by McDonnell Douglas. The Hornet has been in service since 1983 and is used by the U.S. Navy and Marine Corps as well as some foreign countries. It is a twin-engine supersonic multipurpose aircraft, capable of flying bombing missions, providing close-air support and air-to-air combat. With a top speed of Mach 1.8 (1,190 mph) and a range of up to 1,250 miles, the Hornet is a versatile and deadly aircraft indeed. It’s also popular in the movies: Will Smith, playing a Marine Corps pilot, flew a Hornet in the movie Independence Day and duked it out with alien fighters. The show is spectacular indeed. My first visit to a Blue Angels show was on an overcast day with occasional raindrops, but the Angels flew anyway and did their low-altitude show. This time, skies were clear and the squadron was able to air it out, so to speak. I was able to take a few shots with my own camera, but they don’t really do the show justice. 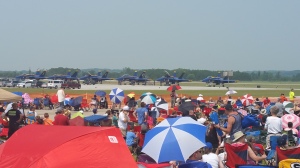 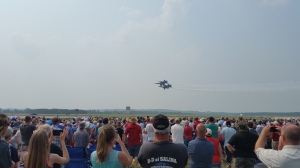 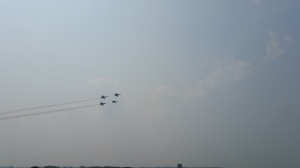 These are better, from the Blue Angels’ website, http://www.blueangels.navy.mil. 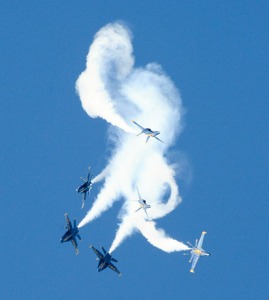 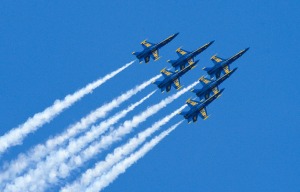 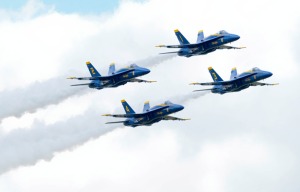 Even these pictures can’t convey the awesomeness of this show. What impressed me most was the precision of the flying. It takes a lot of training to learn these maneuvers and that takes discipline and dedication. You don’t get that by sitting around, that’s for sure. Navy and Marine pilots can’t even be considered for a billet in the squadron without at least 1,250 hours in tactical jet fighters. That’s a lot of flying. But once you get the coveted seat, you serve for two years. In addition to the pilots, the 130-person Blue Angels team consists of dozens of support and maintenance personnel. The whole thing costs the taxpayers about $38 million a year, but it’s well worth it, in my opinion. These people are some of the best America can produce. They come from all over and they are women as well as men.

Everybody feels patriotic on Independence Day, and when you get to see these men and women in action, you feel especially proud. And also thankful that they’re on our side. 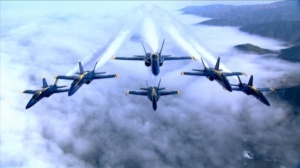