Saturday, May 2, was a beautiful day in northwest Wisconsin. Many of our citizens—and more than a few from neighboring Minnesota, judging from license plates—were in their boats, out on the lakes with fishing lines in the water. It was the opening day of our game fishing season, which is a big deal up here, almost as big as the first day of deer hunting in November.

I only wet a line once in a great while, but I do read every day, and being an author I like people who read, and people who read like to go to bookstores. Yesterday was Independent Bookstore Day, and it was extra special for one of my favorites, Redbery Books, up in Cable.

Cable is about 50 miles from my house, and another forty miles or so beyond Cable is the beautiful Chequamegon Bay area of northern Wisconsin, home to the Apostle Islands and picturesque towns that dot the Lake Superior shoreline, like Ashland, Washburn and Bayfield. My trek north this time would stop in Cable, with a stop on the way in Hayward, the seat of Sawyer County and the hub of the Chippewa Flowage chain of lakes. I really like Hayward and we visit often for shopping, dining and an occasional movie. Plus, my fellow authors and I have frequently set up tents during their big festivals, Musky Fest in June and Fall Fest in September.

What a bookstore chain should be.

Hayward’s downtown hosts a Book World store. Book World is an independent chain of about four dozen stores in the Upper Midwest. My favorites are the stores in Rice Lake and Hayward, both of which stock my books. You’ll always find a friendly face at Book World, not to mention well-stocked shelves. On this visit I was glad to use a special coupon for the day and pick up Like Dreamers: The Story of the Israeli Paratroopers who Reunited Jerusalem and Divided a Nation, by Yossi Klein Halevi. Last year I’d read Steven Pressfield’s oral history of the 1967 Six-Day War, The Lion’s Gate, and since then have been eager to learn more about that time and that place. I was fortunate enough to visit Israel in 2010 (you can read about that trip on my wife Sue’s travel blog, which is in the Links section) and so the Halevi book quickly became part of my library.

What an independent bookstore should be.

It’s only 17 miles from Hayward to Cable, and when I arrived at Redbery Books, the day’s festivities were just getting started. The store was celebrating the retirement of its longtime owner, Bev, and the arrival of new owner Maureen, who is in the process of moving permanently to Cable after many years running the public library in Reedsburg, down in the southwestern part of Wisconsin. Bev has had my books on her shelves for a couple years now, and I was happy to connect with the new owner.

Like almost everybody who visits a bookstore, I had no idea what I might want when I got there, but soon found this book, Redeployment, by Phil Klay, winner of the 2014 National Book Award for fiction. At first I thought it was a non-fiction collection of veterans’ stories, but based on the reviews, Klay’s fictional work has struck a chord. As a strong supporter of veterans, I’m anxious to read this book in order to get a better insight into these brave men and women who have put their lives on the line to protect us here at home. 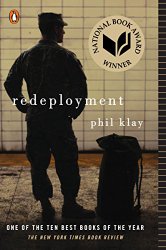 As an unexpected bonus, I found the bargain shelf and picked up The Delta Solution, the third in Patrick Robinson’s series about Navy SEALs. If you like well-written military thriller series, Robinson’s work is well worth a look.

The end of the bookstore? Nope.

Many people predicted the end of the bookstore when Amazon began its rise. Guess again. Go into one of the few mega-bookstores still around, like Books-a-Million or Barnes & Noble, and it’s never empty. Small-town bookstores are still doing well in small towns, and in big cities the small-town touch does well, too, as this author found out recently when she wanted to open a bookstore in Nashville. http://www.theatlantic.com/magazine/archive/2012/12/the-bookstore-strikes-back/309164/

Just a week earlier, I’d been down in the Milwaukee area on business and to visit my son, Jim, and his girlfriend, Kate. They live in the suburb of Wauwatosa, and were eager to show me their quaint little downtown, which includes, you guessed it, a terrific bookstore, The Little Read Book. 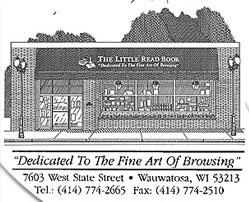 After returning home, I spent some time out on our deck, enjoying the day and going through my recent magazines. I subscribe to several, and they tend to build up, as magazines are wont to do, so I skim through them for the articles I want to save. In the March issue of Men’s Health, I came upon a style section with tips from the actor Colin Farrell, and I was a bit surprised to see that he had this to say about bookstores:

When you walk in, there’s almost a molecular ghost of all human endeavor—the tears, pain, joy, and curiosity—all the unanswered questions. It’s all right there, stacked up on the shelves.

Does that nail it, or what?

There’s a lot to be said about Amazon, to be sure, and when I’m in a metro area I’ll usually find the nearest BAM or B&N, but I’ll also seek out the neighborhood bookstore. You never know what you’ll find, and you’ll be supporting a local or regional business that adds unmeasured value to our communities. Find yours today.